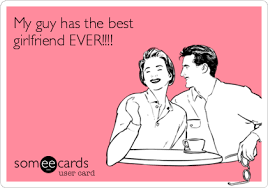 Folks are quick to say “Don’t take advice from a woman that can’t keep or doesn’t have a man.”

Well let’s think about this for a second.  Do we know why she doesn’t have a man? Do we know for sure that she can’t keep one?

All we know is that she is currently single but surely she has some advice to share if she is a woman of age right?  Who’s to say that she hasn’t learned from her mistakes that caused her to be single and wants to share it with others?

Why do folks equate being single with being “unwanted”  “undesirable” or “unknowledgeable”  of how to keep or get a mate?  I never really understood when people said that.

Now I can understand folks saying “Don’t get your hair done by a bitch that has bald spots.” Okay that makes sense but anyway …

Another saying that kind of grinds my gears is when folks say “Don’t play the role of a wife if you’re just a girlfriend.”

Riddle me this, how the % (*)%#_%^ can you become a wife without showing your mate that you have the potential to be one?

You can not apply for a job without a resume so how can you apply for the role of wife without showing your skills?

I bet the woman who made that up did everything from lick the bottom of her mans boots to serving him plates of food while he’s riding a fucking motorcycle going 90 mph running alongside him trying to spoon feed him her mamas famous collard greens and now that she has fought tooth and nail and done everything under the sun to get a ring and become his wife she wants to talk down on “girlfriends,” like she ain’t never been one.

Don’t listen to that shit ladies.

And if it’s a man that’s saying this nine times out of ten he’s probably an ex womanizer that had enough of fucking women over and has finally settled down now he wanna talk shit and downplay all the women in the world who hasn’t gotten proposed to yet.

At the end of the day, when you get your man you do what you have to do to keep him interested in the relationship, whatever that may be and whatever works for you and him.  Love him, respect him, make him smile, make him feel good, be his friend, his buddy, his best man.  Make him laugh, enjoy him, build with him, be there for him, cater to him, take care of yourself, be desirable, lovable,  in tune with you and most of all ENJOY doing all of these things and naturally if your man wants to be a husband he will be.

But when you are in a relationship, the worse advice someone can give you is to not give your all until you get a ring.  To not enjoy pleasing your man and doing all the things that you want to do from your heart because “You ain’t his wife.”

Relationships aren’t rocket science, either they wanna be with you and marry you or not.  No need to play games.